This might just be the best century ever to have hair loss problems! The market is filled with lots of solutions ranging from hair loss shampoos, dietary supplements, serums, oils, to cosmetic surgeries. And now, laser treatment might just be the most innovative of them all.

Laser treatment for hair growth involves red light therapy or low-level laser therapy. The idea here is to irradiate the scalp tissue with photons that are absorbed by weak cells. They stimulate circulation and trigger the hair follicles to grow hair.

On the flip studies, studies also show that not all laser treatments work. In some studies, some people benefited from low-level therapy while others did not. One of the key factors determining whether you will benefit from this technique is the specific type of gadget that you use. iRestore Laser Hair Growth System is among the several laser treatment options available on the market at the moment.

If you’re looking for a more potent solution for hair thinning and shedding, you might want to try the revolutionary product Folexin that nourishes your hair and supports its natural growth process.. 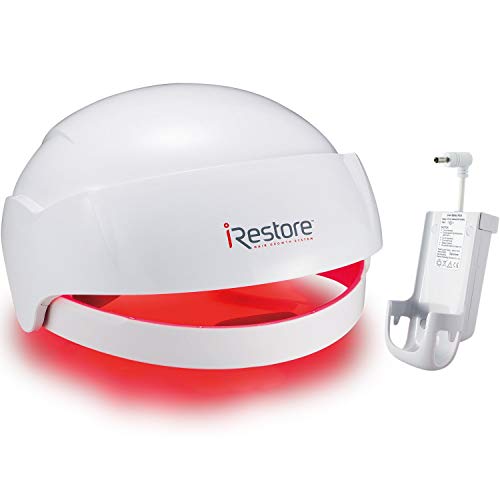 The iRestore Laser Hair Growth System is a low-level laser therapy gadget from Freedom Laser Therapy designed to treat hair loss. The helmet actually looks like something lifted from Star Wars. The system works with both men and women who are experiencing Androgenic Alopecia.

The system comes with 3 items; the iRestore dome itself, an AC adapter, and a user manual. The dome is designed with a plastic material, and it’s fitted with a headband to secure it in place. It’s also equipped with some soft cushions for ergonomic purposes.

The system comes with a handheld controller, which serves as a control center for powering the gadget on and off and performing other functions. The controller has a tiny display showing the timer. It’s also backlit, so you shouldn’t struggle using it at night or in a dark room.

On the inside of the dome, you will see the actual lasers. There are 21 lasers in the dome and 30 LEDs to emit specific light wavelengths. There is also a bigger system known as the iRestore Professionals, which packs 82 lasers and 200 Red Luminous LEDs. 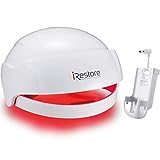 How Does It Work?

This system takes advantage of medical-grade lasers and LEDs to produce light at just the right power and wavelength to stimulate hair growth.

The high-quality lasers produce coherent light which penetrates the scalp to reach the targeted areas with high precision. On the other hand, the LEDs encourage stimulation over a bigger area. In essence, this technology makes sure that the light reaches exactly where it’s supposed to and covers the entire surface it’s intended to. This precision produces uniform results, which is just what you want when you are looking to regrow your hair. Also, the precision makes sure that there is no overstimulation and other complications that can have severe side effects.

What do the lasers and LEDs target?

Well, the aim is for the light to reach the cells within the scalp. The cells will absorb the light, and this sets off a number of reactions. It increases blood circulations and also helps to free up sebum to unclog pores. An increase in blood flow increases the supply of nutrients to the hair follicles, and since the pores are now unclogged, the stunted and miniaturized hair follicles jump back to life and grow stronger and longer hair.

How to Use the iRestore Laser Hair Growth System

The technology that the iRestore Laser system operates on is a bit sophisticated, but using it is actually so effortless. Here is a step by step guide on how to use it:

Can you pause the system midsession?

Yes, you can. The start/pause button allows you to pause your session momentarily, do something else, and then resume your therapy session from where you left off. However, the device will turn off automatically if you do not resume the session within 5 minutes.

The iRestore Laser Hair Growth System should be used every other day for 25 minutes only. Do not overuse this device; otherwise, it can cause unnecessary complications.

iRestore Laser Hair Growth System and low-level laser therapy (LLLT) as a whole have not been embraced by everyone partly due to the potential risks involved. For one, iRestore Laser Hair Growth System is cleared by the FDA, but like other LLLT gadgets, it is never scrutinized more keenly to determine potential dangers as is the case with drugs before they are approved for human consumption. There is also not enough clinical research establishing the possible long term side effects of using laser therapy for hair growth.

Individuals taking photosensitizing medications should avoid using iRestore Laser System and other laser therapy devices. That’s because the therapy is known to interact with such medications.

iRestore Laser Hair Growth System is available online. You can buy it from the official iRestore website as well as Amazon. The system comes in two options: a small iRestore Essential and the bigger iRestore Professional.

iRestore Laser Hair Growth System is a decent gadget that has proven to be quite effective for many people. The massive user testimonials online speak for themselves. Scientific studies have also shown that the technique is not just effective but also very safe. In addition to that, the iRestore Laser System will help you save more cash in the long run. Sure, the initial purchase is quite high, but then the gadget is rated for over 10,000 usages making it better than other hair loss products that you need to buy every month. Go ahead and try it out today.