You’re probably here because you’ve watched the Micro Touch Max’s razor commercial for its newest hybrid electric trimmer which is the Micro Touch Solo Razor. If you’re interested in knowing more about this razor, you’ve come to the right place. Because in this blog, we’ll not only show you all the best features of this razor! We’ll also discuss the pros and cons and all the things you need to know to make a wise purchase!

So, Who makes the Micro Touch Solo Razor?

The Solo Razor is manufactured by the same Micro Touch company that produced the Micro Touch Max and Micro Touch Titanium Hair Trimmers! Although the Micro Touch solo is made in China, it is equipped with high-quality materials capable of creating the best micro shaves.

What is a Micro Touch Solo Razor? 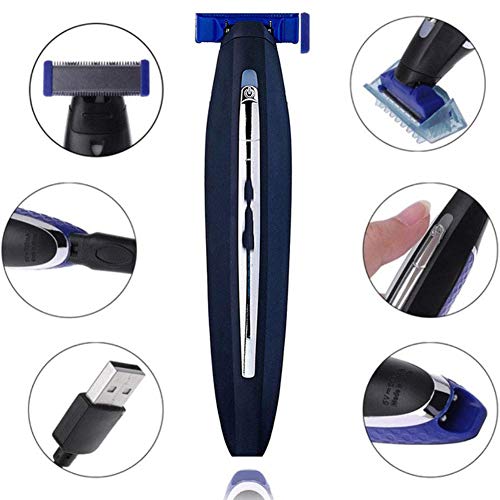 One of the best features that make this razor one of the hottest shaving equipment in the market today is its durable construction. First of all, it’s integrated with a dual-sided German Stainless steel blade. German stainless steel is popular for its lower carbon content. This makes it softer yet durable and easier to sharpen compared to other types of steel blades.

In addition to that, the Solo Razor has a fast-cutting feature ranging up to 200 strokes per second. Very similar to the other brands like Philips Norelco OneBlade. Furthermore, it has a pivoting head and a built-in LED light to help you achieve the cleanest shave!

When it comes to performance, the Micro Touch Solo Razor is powered by a rechargeable lithium-ion battery. One full charge can last you up to 45 minutes which is usually enough if you just want to shave your beard or groom unwanted hairs.

What Can you Do with a Micro Touch Solo Razor?

As implied by its name, you will not need any other clippers or body razors if you have the Micro Touch Solo Razor. That’s because this razor is a full-body razor capable of trimming, shaving, and shaping any body hair type and length. 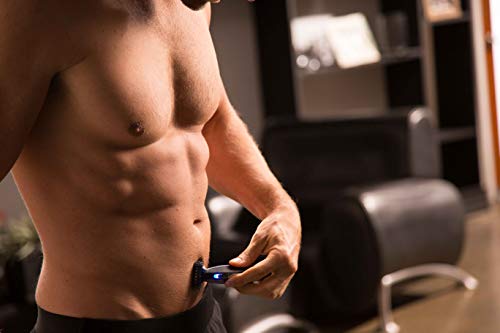 With the Micro Touch Solo razor, you can definitely save time and money as it can also help you edge your beard! The traditional Wahl Edge Clippers used by most professional barbers will cost you around 50$!

But you can avoid this cost if you own a Solo Razor. Because this razor can help edge, beards, goatees, mustaches, sideburns. In addition to that, you can also clean and shave your neck hair from the comfort of your own home!

The Solo Razor package comes with trimming combs that let you shape and trim your beard according to your preference. It already comes with 1mm, 3mm, 5mm guide combs, which usually will cost you around $10 if you purchase them separately

When you remove the guide combs, you’ll have a precise groomer that can remove unwanted hair on different parts of your body! Thanks to its Ultraflex pivoting head, the Micro Touch Solo razor contours perfectly to any body part.

You don’t need water, soap, or shaving cream to use the Micro Touch Solo Razor. Because the hair is stiff and dry, the Solo Razor makes it cutting your hair faster and safer as the razor doesn’t come close enough to the skin, preventing nicks and bumps!

Where to buy a Solo Micro Touch Razor?

The Micro Touch Solo Razor can be easily bought online on their website or from Amazon. Find out the latest price of this razor directly on Amazon:

Some users find that the 45 minutes battery charge is not enough to fully trim and shave their beard. So if it takes you more than 45 mins to shave, it is much better to invest in a safety razor or a corded razor. Some of the best cordless electric razors can last up to 1-1.5 hours for twice the price of the Solo razor.

Another usual comment we found about the Solo razor is that it is not powerful enough to shave thick facial hair and beards. So, if you have very thick hair, make sure to take this into consideration before buying this product.

May users commented that it doesn’t create a clean shave as advertised. That’s because they believe that it is underpowered, the blade isn’t sharp enough, or because of its dry shaving features. Dry shavers usually don’t create a closer shave compared to wet shavers.

If you want a shaver or razor you can use in the shower, then the Micro Touch Solo is not for you. It is a dry shaver that can’t be washed or submerged in water. It can only be cleaned using the brush included in the package.

Another thing that users didn’t like is the fact that it doesn’t have any warranty. There were a lot of users who reported broken products after several days of use.

Finding a perfect groomer can be very difficult especially if you’re one of the men who need regular shaving. While the Micro Touch Solo Razor looks like a pretty good solution for your grooming needs, still, we believe that when it comes to razors, no one size fits all.

Micro Touch Solo Razor is best for people who have thin and less dense facial and body hair. It is best for grooming unwanted hair but not that precise to create the closest shave. So, if you have a very thick beard and were planning on using the Solo Razor primarily to shave your facial hair, it is wiser to buy a more powerful corded or electric shaver.

If you believe otherwise, please don’t hesitate to leave a comment below!

Is the Micro Touch razor waterproof?

The Micro Touch Solo Razor is a dry shaver, it doesn’t require water, soap, and shaving cream. Its handle is water-resistant but it is not recommended for wet shaving. In fact, a cleaning brush is included in the package to clean the razor after trimming

The Micro Touch Solo’s blades are replaceable and users find that it can last up to 4 months. Traditional electric shavers blades are usually replaced every 12 months. This will depend on the quality of your razor and the type of use.

How Do I Clean my Micro Touch solo?

The Micro Touch Solo Razor comes with a cleaning brush that you can use every after use. It is not recommended to submerge, rinse or wash the solo razor with water or any cleaning liquid.

How to Put on the Head Blade/Head on a Solo Micro Touch Trimmer?

The Solo razor head is very easy to replace. Simply push the Micro Touch blade release up to remove it. Add the new blade in the original position and press it onto the handle. There will be a clicking noise that assures you that the new blade is perfectly locked into the correct position.

How much is a Micro Touch Solo Razor?

The Micro Touch Solo Razor costs around $20-25 excluding the shipping fee. It comes with a USB charging cable, a blade guard, 3 Combs (1mm, 3mm, 5mm) and a cleaning brush.

How to Charge Micro Touch Solo?

The Micro Touch Solo Razor package comes with a USB charging cable. Simply plug the small end of the charging cable into your razor and the USB end into your charging port. Charging usually takes 3-4 hours depending on the remaining charge of your razor.

How long does it take to charge a solo?

It takes 3-4 hours to fully charge the Micro Touch Solo Razor. During charging, the Solo Razor’s power indicator is colored red. The light will automatically turn off once the razor is fully charged.

How Long Does the Micro Touch Solo Hold a Charge

The Micro Touch Solo Razor runs up to 45 minutes when fully charged.  This is usually enough for quick body grooming and beard shaving.